First findings
1. You must sort the material that you found on the beach.
A. any bottle that has a hole, is broken/ damaged or just to old: put them in the garbage.
When you do that,best is to empty the water out first then compress/crush them and put the lid back on, this way they take less space and are easy to transport.
B. split the remaining bottles in two groups
those made of thick material and thin material (normal water bottles)
2. Use the thin water bottles to make rope
They are made of thin plastic and are not useful to make flutes.
Before you make rope you have to remove all the corrugations (?) , in order make the plastic bottle flat) .
Do this by closing the bottles and keep it above a gas stove
(works only when there no holes in the bottle!)
do not use to old botlles the plastic gets brittle and the rope will brake easely.
3. install the floating bottlesÂ  used as buoy to keep the construction afloate),
then they are on pressure (by holding them over the stove)
then they are easier to process. I used stronger bottles for this like the cola and sprite
4. Use bottles of thick plastic for the flutes mostly washing soup bottles and anything stronger
they are easier to mount then the thin-walled
(they sqwach when mounted)

Our website Plastic SoulsÂ ,made for this project, is now online
On this website you can follow the process of creating Plastic Souls, which is a continuous process of reflection and improvement, but also participate in this process. You can read tutorials on how to build your own floating instrument and collaborate in the development of the instrument. 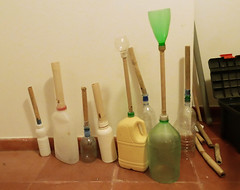 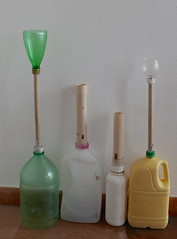