To create sound art with our body, the most private space of all, results in the most intimate confrontation between the public and our work »Sonic therapy« in 2004 first presented in Ljubljana, Slovenia at the Kapelica Gallery in the form of an installation that gives visitors the chance to experience a unique, personal sensory experience. The installation mimics a clinical environment, firstly visitors details are taken, then admitted to a cubicle complete with hospital bed,chair and bed-side table where artist ‘doctors’ and ‘nurses’ will treat their ‘patients’ with personalised sound therapies. Therapies range from relaxing and energising to slightly disturbing.  We were constandly working on new Sonic therapy ideas and talking to artists to develop it further.
But with the 2010 presentation at Netwerk the centrum voor hedendaagse kunst in Aalst and the support of fondsbkvb in Holland we made a quantum leap. Not only were three new therapies added but all our existing works were completely reworked  (with the exception of aqua elise for it can not be improved). The therapies have now a more integrated, sonic and physical balanced. Slowly “sonic therapy” is mutating in to “physonic therapy”. From using existing “off the shelf” elements we are now building our own new, tailored and sound driven treatments. Making the therapies much more harmonically consistent and physically intense. It is maturing rapidly and there is still a long list of improvements on existing therapies with plans for new treatments. We’re just beginning to see the potential of individual physical sonic treatments.
For the future we will categorise the treatments to the four Humors:
Humour-Element-Organ—Qualities- —-characteristics
Blood–air–liver —warm & moist— courageous, hopeful, amorous
Yellow bile- fire-gall bladder-warm & dry— – easily angered bad tempered
Black bile-earth-spleen —cold & dry— espondent, sleepless, irritable
Phlegm–water -brain/lungs- -cold & moist– rational calm, unemotional

Most of the time our work is a one way communication from us to a larger audience. As a soundart group we were dissatisfied with this situation and wanted to explore the possibilities that can be created to change this pattern. For this reason a form was developed where we can have a personal and individual interaction with our public.
In our work we are often confronted with an expectation pattern that is based on standardised rules of behavior. These rules are more or less globally diffident. Therefore people from different cultural and social background know what is expected of them when they visit a music concert or an art event. If however you select a form that is unknown to them and does not have a public divined model of behaviour, people start to respond according to their own culture and tradition. In order to create this open situation we have chosen the form of a hospital and the use of medical forms in presentation and action. The result is that the French respond very different to the English or Germans and that they are all incomparable to the resonance of the people from Cairo. We are happy to say that we have found an installation form that is a mirror that reflects a peoples culture, individual emotions, fears and interest.
This installation gives us the possibility to experiment with the many ways you can experience sound, especially how it can be experienced physically.
The ultrasound of therapy starts with an ‘intake’. Here the patient is asked to enter relevant data in to a patient’s form, name, address, date of birth, profession, relevant habits, etc.  From this form we select a treatment. The patient  is accompanied by a ‘doctor’ or ‘nurse’ to a hospital bed, visually isolated by hospital curtains. The sound therapy will vary in time and treatment: since each patient and each treatment is different, s/he will be individually treated and instructed. Before leaving the patient is asked to complete their form with any comments, good or bad, that they may have about their specific treatment.

1. Aqua Elise:(by Carlo Crovato) An acoustic treatment made by two toy music instruments that have been modulated, driven by water power.
2. Tesla: (by Mark Bain) the creation of a giant coil, so that the patient is asked to lie down in a electric field, were two strong magnets are pleased on each side of the head.
3. Synchronator: (by Bas van Koolwijk) A live sound/video manipulation instrument specially created for sonic therapy. The instrument allows you to manipulate various element like colour and patterns. the patient watches the video on a monitor ,placed under the bed, through a hole is made in the mattress . The soundtrack played through headphones and two bas-shaker fixed under the bed, for a full physical experience .
4. Digital Tsunami: a 6 engine massage blanket and two sanding machines mounted under the bed, controlled by different sound channels via light organ.  The soundtrack is on the headphones and on two bass shaker that are mounted under the bed. Plus a set of 3 ventilators,  and two stroboscope.
5. Kozo Komplex:(by staalplaat soundsystem) system of BMB complex (see below) with a soundtrack made by Kozo Inada
6. Smith & Wickham: (bySimon Wickham-Smith) four sine waves of varying amplitudes are played simultaneously with a combination of pink, white and brown noise. The selection of the specific frequencies is made in consultation with the doctor and is based upon the Indo-Tibetan theory of vadacakra.
7. Adham Blanket: (by Adham Hafez)
The idea is to create a sound blanket for maximum contact between the person and the sound, by making the sound surround the person.  A blanket that would allow the whole soundtrack or sound files to be transmitted in a way that resonates around the body, allowing the person to have a direct physical contact with the sound waves, as well as a separate sound that is to be introduced to the person through headphones. Two tracks would be played at the same time and keeping a strong sonic relation to each other that enhances that sound experience a person would go through in a project like this.
8. Eletro Pattern:(by staalplaat soundsystem)  a 6 channel sound composition  that is payed back direct on the body by means of  Electronic Muscle Stimulator ADHESIVE PATCHES that are placed on the body, the  a bed treated with two electrical blankets and  a 500 W theatre light is placed above the bed.
9. Carried away: G.X. Jupitter-Larsen made a field recording composition that is heard blindfolded while laying on a stretcher and constantly transported  and relocated by the artist ‘doctors’ .

Old  therapies ;
A. Raplapla: ( by Lynn Pook) a 14-channel audiotactile soundinstallation, in which the body becomes a resonator, from within which the patient, lying on a hammock, hears prerecorded sounds played by a computer system.
B. Falung Song: a edited video of Falung Gong meditation is placed under the bed, and a hole is made in the mattress with a Chinese’s Buddha chant machine that plays Buddhist loops on headphones, one bass shaker is mounted under the bed.
C. I See:  A 3D video made for us by Bas van Koolwijk  that is viewed through 3D glasses. The monitor is placed under the bed and the soundtrack played through headphones and a basshaker fixed under the bed, for a full physical experience .
D. Riders on the storm: a video loop is placed under the bed and a hole is made in the mattress one sanding machine is mounted under the bed controlled by sound and a different composition of Kozo Inada is on the headphones .
E. BMB con-plex:(by BMB con) (Biotechnology Makes Business Consultancy) brings you Der Otoakustischer Emissionstherapie. Recent research has shown that the human hearing mechanism produces its own soundwaves. These waves, known as “Oto-acoustic emissions” are high up in the ultrasonic spectrum and normally cannot be perceived by a listener. These soundwaves interact with incoming sound as part of the localisation and analysis system of the human brain. BMB con. have developed an experimental therapy which can help listeners to produce stronger Oto-acoustic emissions, and therefore improve their hearing capabilities. An apparatus is placed around the ears of the patient. This detects the OAE’s, transposes them into the normal hearing range and also introduces a controlled bio-feedback circuit so that the patient learns (subconsciously) to control OAE production. The patient is blindfolded to avoid conflicting stimulation. A side effect of the therapy is that short-term auditive memory can be erased – patients report the sensation of hearing recent sounds “leaving their heads”. This has no known adverse effects, and in fact adds to the sensation of having “clear ears” after treatment.
F. Hot Shaking: a bed treated with an electrical blanket and a massage machine is controlled by sound via light organ, AEG takes body sounds and two bass shaker are mounted under the bed, a sound track of 70’s porno is heard through headphones. 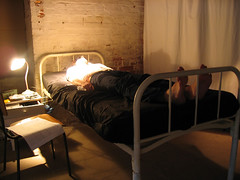 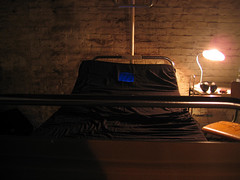 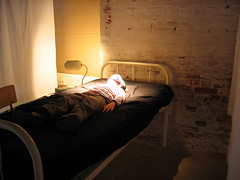 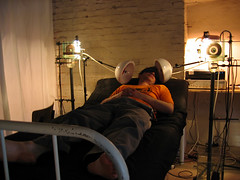 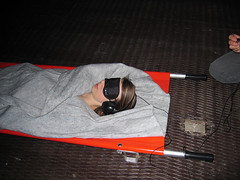 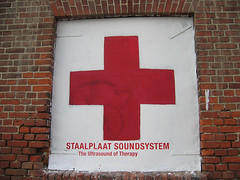 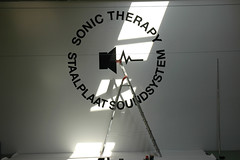 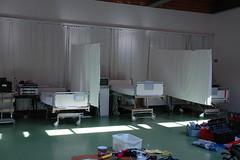 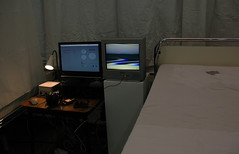 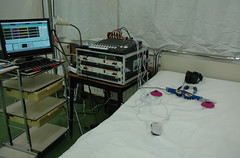