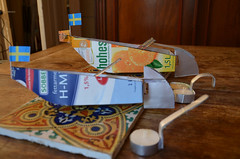 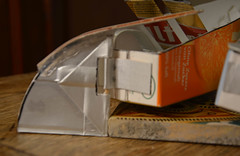 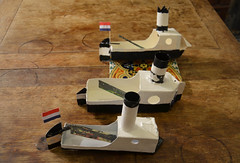 This is not a sound artproject but I still put it online, for it is a creative project.
This poject is started because soon my son Miikka will have his birthday (he will be 7) and the tradition is that then we build something with all the kids that come to the party.
Last year we did a drawing robot and before that a car that is balloon driven.
So now the plan is making putt putt boats out of milk package, and a engine of a beer can plus two straws. following the science toymaker instructions.
I did made some improofments to the science toymaker.
1. The burner they suggest  are made of a 1/4 birthday candle, they don’t last very long (about 4 seconds Miikka was complaining)
So we pimped tea candles by doubling the wick.
2. I made my own boat models but wanted to stay in the science toymaker tradition and use only really simple recycle material.
3. I added a rudder, I use wood (toothpick) and hot-glued it in the rudder  then fold a strip around it and staple it. (hope this description  makes cense)
this way it moves freely and looks cool, and its very simple to do.
last but not least
4. I made a new engine model with 4 straws instead of the normal two and it has a bigger chamber, I do not think it goes any vaster but he sure is louder

Anyway I started with some boat test and they all seem to work fine.
Here some photo’s of the 3 test models that I wanted to show you.
(named miikka I, II and II)
I wanted to stay in the science toymaker tradition and use only really simple recycle material
all simple one engine models.
But being the person who I am I started making more models with two and three engines.
here the first two engine model boat (2liter)

I made the little house for wind protection so that it can run outside (you can tilt it).

these are two speed boats

A dragon boat with 2 engine
Sins a few days our supermarket is selling a new kind package that is smaller and  higher, somehow it made me think of a dragon boat.

Out of a pommesmajo (French fries+mayonnaise) tray, I made the most useless  putt putt boat.

For the birthday party
I plan on building about 20 engines and let the kids build the boat, plus have some cans for the kids that want to build their own engines
and all of them have to make their own boat but I will have the test boats as samples

Here is a twin engine putt putt video link of a test made in my bathroom (sorry for the noise) http://youtu.be/ZMKRwyzDTc4

And a video of the most useless putt putt boat http://youtu.be/cSx9HCXRi_k