A composition for 30 taxi’s in New Delhi.

In 2008 Staalplaat Soundsystem was invited by the Indian “Khoj – International Artists Association” to come and work in New Delhi.  Our main interest in New Delhi was the incredible volume and size of traffic, and the sounds it produced. One prominent inhabitant of this mobile city is a small vehicle similar to the Tuktuk called the Auto. The Auto is a tiny 3 wheeled green and yellow taxi  (autorickshaws) that is only large enough for two passengers and a driver. The Auto inhabits the city by the thousands, at times swarming the street like insects. Their communication language is by car horn much, signaling with it, much the way we use car signal lights here in Europe. Applying the Architone practice we seek to intercept this phenomenon of car signaling and overlay it within a meaningful structure.
idea was to take 30 taxi’s  (autorickshaws) and remotely trigger their horns as they drive along a pre determined route. Using the taxis and their horns as a choir playing horn paterns in sync with each other mixing the intended sound of my composition with the non intended of the loud steeds of the Indian city..
The system to control the signal horns of the taxis are based on walkie-talkies used to communicate the signal over legal and open frequencies at a distance of up two kilometers.
Each taxi is equipped with a receiver that can translate the tone-signal into a switching signal. The receiver is self build to switch the signal that controls the horn of the car. In this way the car horns of the various Autos can be switched on and off independently or in groups.
In addition as we add this un accustomed layer of organized horn sounds to the cacophony of un organized ones, the sound of all the horns are called attention to- the listener liberated to hearing for the first time the true unexpected soundscape of the region. The International Sonic Art Residency period in New Delhi was not sufficient to solve the technical problems to realise this project, so we agreed with Khoj to build and develop the equipment and technology needed in Europe and return in 2009 to New Delhi at the India Art Summit, and so we did.

Realization
The system to control the signal horns of the taxis are based on simple off-the-shelf technology.  Reliable  German highend walkie-talkies are used to communicate the signal over legal and open frequencies at a distance of up two kilometers. Each taxi is equipped with a receiver that can translate the tone-signal into a switching signal. The switch signal controls the horn of the car. In this way the car horns of the various Autos can be switched on and off independently or in groups.

We will organize the cars/drivers in 3 groups of 10 each. A sound choreography will be developed for the topography of the location. The drivers need to drive routes and formations over the duration of the presentation. Their car horn is played by us via the central controlling unit. In this way we can control the flow of the different sound patterns and how the sound is divided (spread out or concentrated etc.) and mixed when the routes overlap, and cars approach/disappear. 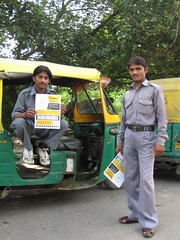 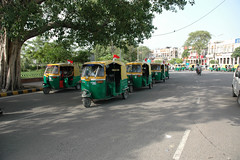 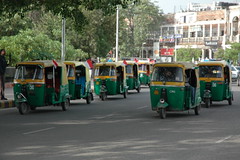 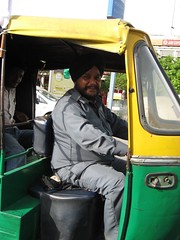 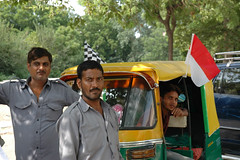 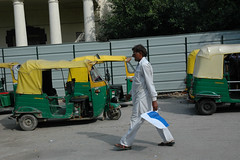 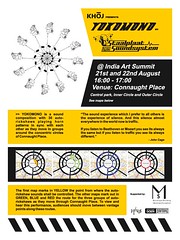 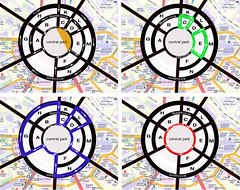 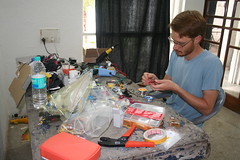 here is a simple nokia video

We have realized that the equipment and technology developed for India project, (Transmitters, receivers and  car horn drivers) can be used for a parallel project in the European sphere once adapted to the local street tradition and urban structure. Several art institutions have responded enthusiastically to the idea of adapting this installation to their cities.  They include:
Berlin-CTM in January 2010
AV Festival 10 are 5-14 March
TodaysArt in September 2010. (the Todaysart festival will do the overall production)
Were talking with parties in Mexico, Poland and Egypt but the negotiation are still open.

A composition for 30 taxi’s in Berlin.

From our traffic culture and its sonic codes of reference, to the density and sound volume on the streets, and the history of urban planning, in Europe the city is a very different place. Here there are two main car processions; for a wedding or for a funeral, and Europe has a silent street language were using the horn is reserved for emergency situation (or expressing anger) but on the other side in Berlin it is used by the large Turkish minority to loudly celebrate a car marriage procession by touring a honking group of cars through the street.
For example in Berlin we have chosen the Sieges Saule with the Strasse des 17 juni as location, not only for its sound tradition (the location of the love parade) but more that it is quiet and empty even compared to other European capitals opening the possibility to work in a lager scale and much more detailed and delicate. So we want to combine our ancient musical funeral tradition of writing requiems with the modern car processions and create a sound choreograph for cars.