Otto Berlin
On a previous Khoj Sonic Art residency in 2006 there was a project done by Cynthia Zaven namedÂ  “Untuned piano concerto with Delhi traffic orchestra” . Khoj organized the Untuned piano, (named Otto Berlin) and it was still standing in the Khoj hall when I came in 2008.
I have met Cynthia Zaven in 2005 at a residency in Cairo and because of that residency she and I were invited to come to Khoj Sonic Art New Delhi. So I wanted to do a second project with the piano Otto, as a sort of tribute.
I want to play the piano with leftover computer electronics that were present in Khoj. Where I come from secondhand material is mostly working material that has been replaced by newer and better.
Here in India secondhand material is 100% dead, old computer cd player have all been opened and given up on
So I had to take part out of them that still work, with the c.d. player that was the small motors. The motors play the strings and the printer resets all the time and so moves the motors . I made 3 printers that play the piano by their reset mode . The printers are triggered by cd players and they loop so printer one starts number two starts number tree , that starts number one, etc.
I made no changes to the piano, its completely undamaged, but the piano is not just Untuned it is complete junk, just like the printers.
Its a rather simple installation, a nice comment on what I found.
It was standing in my New Delhi studio room, I assume by now the piano is back in the hall again. 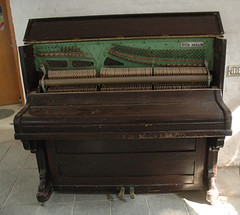 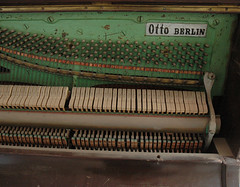 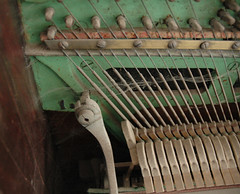 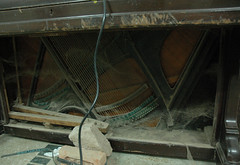 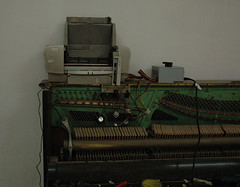 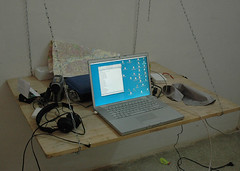 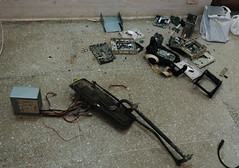 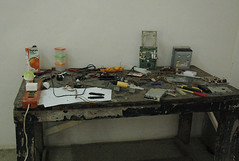 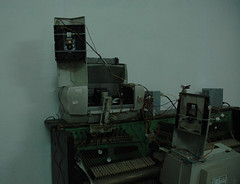 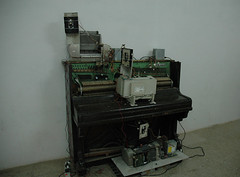